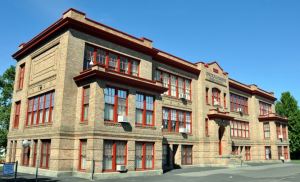 Yesterday we wrote about a study that concluded that “safety in schools can be enhanced by increasing both structure and support: adopting rules that are strictly and fairly enforced and having adults at the school who are caring, supportive and willing to help students.”

In Washington, one school is adopting this positive approach with astounding results. Lincoln High School in Walla Walla is an alternative school with students who face some of the most difficult life challenges and had experienced trouble in their previous schools. The principal, Jim Sporleder, was looking for solutions after three challenging years running the school. He found them in a new approach to discipline that encourages communication, keeps kids in school, and shows respect and support for every student, no matter how they act out.

Sporleder came to this new approach when he was introduced to research that shows that students dealing with trauma are physiologically impaired when it comes to learning. The types of trauma include emotional, sexual and physical abuse, and emotional and physical neglect, a parent addicted to alcohol or other drugs, seeing a mother being abused, a family member in prison, a family member diagnosed with a mental illness, and a parent who’s disappeared through abandoning the family or divorce. An anonymous survey created and answered by Lincoln High students found that the students had an average of between four and five of these traumatic experiences in their lives.

The staff at the school takes this information seriously. They know that you can’t simply punish a behavior that is a reaction to trauma away, so they take a different approach. When a kid erupts in class, teachers intervene quickly. They step out of the classroom with the student and ask what’s going on, suggest the student take a time out in a special In School Suspension (ISS) room, or ask the student if they would like to speak to someone at the adjoining Health Center.

If it escalates, the student meets with Principal Sporleder, who uses a zone system to help students describe their behavior. Students in the red zone get time to process their emotions and then meet with Sporleder the next morning to discuss solutions. Now that the program has become part of the school’s culture, more often than not the students have already talked the problem over with their teacher, apologized and figured out a solution by the time they meet with Sporleder again. If they refuse to apologize to the teacher and solve the problem, or their infraction is more serious, students instead go to In School Suspension, where they can catch up on work, talk to an adviser and have time to move to the green zone.

Using this method, staff say there are much fewer emotional explosions and students are better able to self-regulate. Plus, their suspensions have dropped 85 percent and expulsions have dropped by 40 percent in just one year.

“This is such a paradigm shift, you have to believe in it to make change happen,” said Sporleder. “The administration has to show support. That’s what I’ve seen. You’ve just gotta believe in it. You’ve gotta know that it’s true.”