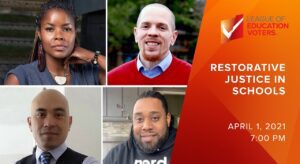 Restorative Justice allows people affected by crime to communicate with the person responsible, often with the aim of a face-to-face meeting. This gives them the chance to talk about the incident. They can explain how it has impacted them, seek assurances that it won’t happen again, and agree on how to put things right.

This is what many people affected by crime want, which is why 85% of victims who go through Restorative Justice are satisfied with the experience. Restorative Justice also leads to a significant drop in re-offending, as it helps people who have committed crimes to recognize the harm they have caused. Restorative practice can also be used to address non-criminal harm.

In this Zoom meeting, we discussed Restorative Justice in schools, focusing on a healing approach to student behavior versus a penal approach. Our panelists discussed what brought them to the work, what their programs do, their philosophy, and where they can be found. They also discussed ways to expand these programs throughout Washington state.

What is the philosophy of your organization and what does that look like on the ground in our schools?

WeAPP celebrates and acknowledges young voices by giving them the opportunity to speak out for themselves. Toyia Taylor’s experience in high school highly influenced the philosophy of her organization, WeAPP. Toyia said she often thinks back to the “teachers who really saw me when my head was down in the back of a class… and didn’t just allow me to go without being seen and supported [me]… not just saying ‘she’s a behavioral problem, a child with discipline problems,’ [but] asking me what was going on in my life and telling me it was okay to have a voice.”

WeAPP is a public speaking class offered in Seattle Public Schools as a core curriculum class or elective. It is rooted in counter storytelling, “the story of those that are usually not seen and heard.” Currently, WeAPP is in 7 schools in South Seattle. Toyia takes pride in seeing how students grow over the course of the class. Students go from being quiet and scared at the start to confident in telling their stories about what it means to have immigrant parents, coming out, their experiences being a person of color, etc. Toyia tells them, “Let them know that this is your story. There is no reason to be apologetic. Be brave and bold in how you feel.” The organization hopes to teach students about self-advocacy by teaching and allowing them to “tell them how they want to be seen and acknowledged.”

Choose 180 is a nonprofit organization that works to transform systems of injustice while supporting young people who are disproportionately impacted by those systems. As Sean Goode stated, they actively engage with schools to create healing spaces for young people as an alternative to suspensions and expulsions in order to curtail the school-to-prison pipeline before it evolves. After determining that Choose 180’s programmatic offerings coincide with the needs of a particular school, then they begin their relationship in providing alternatives to suspensions and expulsions by engaging with these students. The programming consists of an assessment that allows the student to understand what is going on with them and teach it back to the adults, instead of the other way around. This gives the student the opportunity to “internalize it for themselves” and create a purposeful plan.

“Student-led approach is far more productive than a disciplined approach. Amplifying the young person as a possibility to be developed and not a problem to be solved allows them to carry efficacy forward into who they can be instead of being limited by the stigmatization,” Sean added.

Peacemaking Academy centers on humans’ possibility, connecting with people, and healing. This organization understands that young people are struggling emotionally for a variety of reasons, including unhealthy relationships, unstable environments, emotional loss, and much more. However, “in school, it’s hard to have a space to hold emotional capacity because it is transactional,” Saroeum Phoung stated. Many are struggling emotionally and aren’t sure what to do with it. It is vital to help them through “healing, sharing, understanding, and reflecting on their own lives.” Saroeum believes people are meant to be led with aspirations and motivations. Therefore, it is crucial for students to have an adult who will guide them in pushing themselves to be the solution to their own problems, which requires building relationships and trust.

Community Passageways revolves around community restoration and “the need to see a change in the way that we work with young people and how we handle the issues that oftentimes permeate from the home and find a way to the school system and directly back to the community,” according to Dion Schell. He also adds that he hopes schools realize it is just as important to teach education as it is to teach life. The Education Department of Community Passageways helps students tackle barriers that keep them from succeeding while focusing their conversations with these students around what they’re experiencing. These focuses have led to their programs in schools centered on social-emotional development and trauma-informed practices. An example of a trauma-informed program in schools is one that works towards reversing the trauma caused by the school system which has been a “pipeline to prison.” Community Passageways aims towards addressing not only student-caused trauma, but also generational trauma (parents and other family members) and restoring student/parent trust in the system.

How do we take these programs and philosophies and make sure they’re implemented into our school systems?

WeAPP has been integrated into schools through short-term funding, where budgets change from year to year. Therefore, Toyia seeks a seat at the table on a district level in order to drive long-term outcomes from elementary to high school through multi-year funding. Toyia also added that technology during the pandemic has allowed us to reimagine education. A way she suggests expanding WeAPP into schools is by investing in online modules where teachers and administrators are trained to teach the WeAPP curriculum to students, allowing more students to learn “how to speak up and be empowered in their voices and the way they learn so their superpowers come to the forefront.”

Sean Goode believes programs implemented into schools, such as Choose 180, need to be intentional in their efforts from the beginning. He states that there needs to be a mutual understanding and agreement from the start based on community and school needs. Laying the groundwork will allow for the school and organization to work collaboratively and establish goals. Furthermore, organizations “should be partnering with a strategy to exit… the moment the disproportionality is no longer present, we no longer need to be there anymore,” Sean said.

He also calls for better sourcing. If schools have the ability to fund police officers and security guards, schools should also invest in programs that empower young people (WeAPP), create spaces to heal (Peacemaking Academy/Choose 180), or provide alternatives to suspensions and expulsions (Choose 180).

Rather than expanding, the Peacemaking Academy wants to grow deeper. Saroeum realizes that young people aren’t receiving adequate emotional support. In the education field, there’s too much emphasis on figuring out an “intellectual” way to talk about healing rather than emotional capacity. He emphasized that trust needs to be cultivated for young people to allow themselves to be vulnerable in their stories and experiences. Until then, “how is it we shift a culture of conflict and trauma to a culture of kindness, healing, and compassion?”

In 3-5 years, Community Passageways wants to become a “catalyst.” Dion wants to help students recognize the root causes of the issues they’re facing that impede their ability to learn, help them pivot, and become “the catalyst in their family, in their community, and in their school.”