We believe students come first. We are focused first and foremost on meeting the needs of every student.

We are dedicated to designing an equitable education system that serves all students based on their strengths, supports their needs, and provides the resources they need to be successful.

We are committed to working to close gaps experienced by historically and systemically underserved students— including students of color, students in poverty, students qualifying for special education services, students learning English, and students impacted by trauma. We believe this will lead to all students experiencing greater success and reaching their full potential. 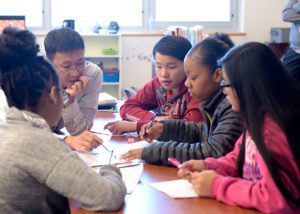 Historically, local levies have provided about one quarter of K-12 education funding in Washington state, amounting to $2.6 billion in school year 2018-19. In 2018-19, districts raised an average of $2,395 per student in local levy funding, with levies ranging from $86 per student in some districts to over $4,000 in others. This difference is driven not only by the levy rates, or amounts that district voters agree to tax themselves, but also by the property values in a district.

New Formula: Starting in January 2019, the levy rate a district can pass was capped at $1.50 per $1,000 of assessed property value or a levy rate that would generate $2,500 per student, whichever would be a lower levy rate.

Because of differences in property values, some districts can pass a levy with a levy tax rate of $0.57 and raise $2,500 per student while other districts can pass a levy rate of $1.50 and raise only $83 per student. To compensate for the difference in ability to raise money through local levies, the state supplements districts with higher than average levy tax rates by providing additional funding called Local Effort Assistance (LEA). By providing additional resources for eligible low-income districts, but not ensuring low-income and higher-income districts are provided with equal resources LEA, as currently designed, eases, but does not eliminate, the levy inequity between districts.

The $1,000 per student funding difference between districts creates a funding inequity rooted in property wealth that disadvantages low-income communities. This inequity should be addressed, by increasing LEA to provide eligible districts with up to $2,500, so that the local levy system is a tool to enhance the program of education for all communities regardless of wealth.

Watch our Lunchtime LEVinar on Education Funding Inequities Across Washington